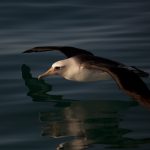 23rd January 2023: High Seas Alliance welcomes the announcement just made by the United States of America that they have joined the High Ambition Coalition for Biodiversity Beyond National Jurisdiction (BBNJ).

This High Ambition Coalition launched in February 2022 at the One Ocean Summit, is a political commitment by countries that recognize that securing a strong international treaty is “the greatest opportunity to conserve ocean life”. With the announcement by the U.S., 51 members have joined to date.

The negotiations to finalize a new High Seas treaty will pick up again at the United Nations in New York from 20th February to 3rd March 2023, at the resumed 5th Intergovernmental Conference (IGC5.2), after they ran out of time to find enough common ground in August 2022.

With less than a month to go before the Conference starts it is critical for members of this Coalition, including the U.S., to live up to its name, and ensure in the coming weeks there is high-level momentum and commitment for negotiations to land on an ambitious final treaty that benefits ocean life, rather than short-term interests and concerns.

As a key and active player within international ocean governance, the U.S. can play a key role in facilitating these discussions, and in the future to help lead efforts to implement a robust and future proof treaty that safeguards high seas marine biodiversity for the benefit of all humankind now and across generations